The following is part of a book review of Cyreniacs Handbook: Handbook of Source Material for Cyrenaic Philosophy 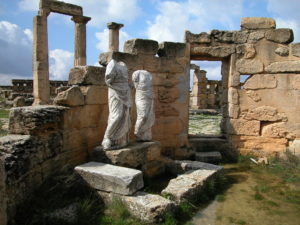 In my most recent Twentieth message, I argue for the possibility of an Afro-Greek intellectual ferment happening around Cyrene, which may have influenced pleasure philosophy. While studying Lampe’s book

on the Cyrenaics, we learned that the philosophical lineage and tradition that Aristippus began there was very diverse, and that many of his disciples branched off into their own sects. However, since much of the philosophizing that took place there involved the celebration of Pleasure as our guide, Cyrene has been often neglected among students of philosophy, and for this reason Michel Onfray calls the city of Cyrene a philosophical Atlantis whose buried treasures we should rediscover.

Anniceris was a disciple of Aristippus, who is credited with inventing pleasure ethics, and he and his sect are considered Cyrenaic, but he was not an acritical follower. He was a reformer of Cyrenaic doctrine who established his own sect. He invented the idea of the hedonic calculus (which Epicurus appropriated and developed further by adding the hierarchy of desires). Anniceris has been called a proto-Epicurean. More on his doctrine can be found here.

Anniceris is supposed to have reformed the Cyrenaic sect, and to have introduced in its stead the Annicerian sect. – Strabo

One passage in the Cyrenaic Handbook says that Anniceris “became an Epicurean despite being an acquaintance of Paraebatus, the student of Aristippus“. According to his biography, he lived at the same time as Alexander the Great, which means that it is chronologically possible that he may have met Epicurus or some of the early Epicureans and converted to the new doctrine. However, since Anniceris is not mentioned as a prominent disciple in any of the extant Epicurean sources, this may be speculation, and we may treat the Annicerians as a pre-Epicurean sect. The Handbook says:

Anniceris had a brother by the name of Nicoteles, also a philosopher, and his student was the famous Posidonius. The sect called Annicerean originates from him. He lived at the time of Alexander the Great, he believed that friendship and patriotism were good in themselves and so seems to have created a sect that was halfway between Epicurean and Cyrenaic.

Among his sayings and teachings, we find many ideas that would later be elaborated on by the Epicureans, including the importance of cultivating healthy habits and dispositions, and the importance of friendship:

Instruction is not sufficient in itself to inspire us with confidence and to make us rise superior to the opinion of the multitude. Habits must be formed because of the bad disposition which has grown up in us from the first.

A friend should be cherished not merely for his utility – for, if that fails, we should then no longer associate with him – but for the good feeling for the sake of which we shall even endure hardships.

Clement of Alexandria had this to say of the Annicerians:

And those called Annicereans, of the Cyrenaic succession, laid down no definite end for the whole of life; but said that to each action belonged, as its proper end, the pleasure accruing from the action. These Cyrenaics reject Epicurus’ definition of pleasure, that is the removal of pain, calling that the condition of a dead man; because we rejoice not only on account of pleasures, but companionships and distinctions; while Epicurus thinks that all joy of the soul arises from previous sensations of the flesh.

It seems from this passage that the Annicerians focused on “the pleasures” rather than Pleasure. I have noted before that the use of plurals rather than singular nouns to refer to things is one technique that may be used by materialist philosophers to speak in clear and concrete language, rather than in abstract language. In A Few Days in Athens, this technique is used in the passage: “Zeno has his eyes on man; Epicurus has his eyes on men“–the idea here being that “man” is a Platonized, idealized abstraction while “men” are real, physical people. Ergo, Epicurus is more personal, and his philosophy is more humanized and reality-based.

The Birth of Hedonism: The Cyrenaic Philosophers and Pleasure as a Way of Life