The following is a book review of Cyreniacs Handbook: Handbook of Source Material for Cyrenaic Philosophy 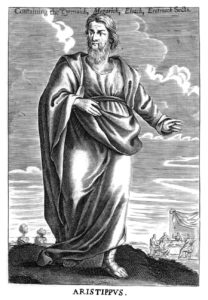 The Cyreniacs Handbook is a compilation of all that can be found in the available ancient sources about the Cyrenaics. The ideas are not explained or systematically explored. For that, I would enthusiastically recommend The Birth of Hedonism: The Cyrenaic Philosophers and Pleasure as a Way of Life

, by Kurt Lampe (book review here). Since the ideas of the Cyrenaic School have been explored in my review of Lampe’s book, I will revisit some of the additional ideas I found of interest here.

The Cyrenaic School was founded by Aristippus of Cyrene. Lucian’s Sale of Creeds summarizes Aristippus’ doctrine this way: “Think the worst of things, make the most of things, get all possible pleasure out of things“.

He was able to adapt himself in both time and place. He enjoyed pleasure, but did not toil after more than what he had. His sayings were the best. Diogenes called him “the King’s Dog”. – Suda

In a previous discussion of the Cyrenaics, and again in the recent exploration of Philodemus’ method of studying and cultivating the virtues, I mentioned that Aristippus was known for the virtue of adaptability, and that he took pride in exacting enjoyment from all circumstances and being in control in adversity and prosperity. The Handbook explores this a bit further, saying (in page 16) that Aristippus could always turn a situation favorable, and that he got pleasure from what was present and didn’t toil to procure something not present. While many other philosophers (even in his own tradition) have a history of turning cynical and misanthropic, Aristippus said that his philosophy gave him the ability to feel at ease in any society (page 19), which is part of how this virtue of adaptability served him to live pleasantly.

Many of the Epicureans of later generations drew inspiration from Aristippus and were proud to see him as their precursor. This passage from Lucretius paraphrases Aristippus’ adaptability doctrine:

You yearned for what was not,
scorned what is.
Life slipped through your fingers shapeless and unlovely.

I slip back privately to Aristippus precepts, trying to bend world to self and not self to world.

Here, we find that Horace (and Aristippus) flip the Stoic paradigm of control upside-down, inviting us to bend the world to ourselves, to use our freedom and creativity to creatively shape our environment and our reality in our favor, rather than allowing externals to control us and force us to change ourselves.

Is There a Neutral State of Sentience?

One of the sources mentioned in the Hand book discusses one of the controversies between the Cyrenaics and the Epicureans.

Among his other hearers was his own daughter Arete, who having borne a son named him Aristippus, and he from having been introduced by her to philosophical studies was called his mother’s pupil. He quite plainly defined the end to be the life of pleasure, ranking as pleasure that which lies in motion. For he said that there are three states affecting our temperament: one, in which we feel pain, like a storm at sea; another, in which we feel pleasure, that may be likened to a gentle undulation, for pleasure is a gentle movement, comparable to a favourable breeze; and the third is an intermediate state, in which we feel neither pain nor pleasure, which is similar to a calm. So of the feelings only, he said, we have the sensation. – Eusebius, Preparation for the Gospel 14.18

The first Epicureans argued against the existence of this third, intermediate state, and argued that all the experiences of the sentient being are either pleasant or painful.

Thinking about the past and the future

Tsouna argues (page 82 of The Ethics of Philodemus)  that we should think rightly concerning past and future, rather than not think of them at all. In our discussion of Philodemus’ critique of maximalism, we learned that

people who look to a long life or to the future in order to pursue new goods constantly are never able to achieve and enjoy the greatest pleasure because they are never content or satisfied. Furthermore, they think that happiness means a greater number of accumulated pleasures.

These teachings also go back to Aristippus, who recommended the practice of “presentism” to his disciples in order to help them squeeze pleasure out of their immediacy. He taught that never being anxious about the past or future is a sign of a constant, clear spirit. He also posited a type of dichotomy of control based on the present moment, and said that we should “care for only the present, for only that is in our power“. He judged of all good by the present alone, saying that the past is no longer, and the future is uncertain.

This is an interesting way of thinking about pleasure as it relates to time. In seeking to contrast this to what the Epicurean founders would have to say, I found PD 9:

If every pleasure were condensed and were present at the same time and in the whole of one’s nature or its primary parts, then the pleasures would never differ from one another. – Epicurean Principal Doctrine 9

If all pleasure had been capable of accumulation … not only in recurrences in time, but all over the frame or, at any rate, over the principal parts of human nature, there would never have been any difference between one pleasure and another, as in fact there is.

The Epicurean focus (as usual) seems to be on the limits that nature places on our pleasures, and is (as in Aristippus) empirical: we SEE and FEEL that the pleasures are experienced as diverse, and we SEE and FEEL that they vary and have their limits in time, bodily or mental location, and intensity. Once available, there no need to intensify these pleasures, only to enjoy them. The anxiety that leads to constant intensification of pleasures and to seeking thrills, reflects ungratefulness of the creature towards nature, and is also based on a flawed understanding of nature.

Principal Doctrine 20 ties this to Aristippus’ presentism by reminding us that the flesh is not able to apprehend these natural limits, but the mind is. It is therefore up to the mind to clearly understand the natural limits of pleasure, and to secure the pleasant life by remaining in a contented disposition.

The Birth of Hedonism: The Cyrenaic Philosophers and Pleasure as a Way of Life