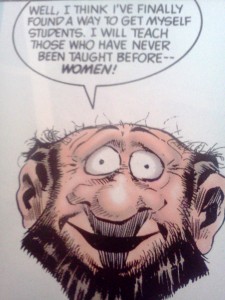 The animated two-volume series Epicurus the Sage was created by writer Bill Messner-Loebs and artist Sam Keith, and published in 1989 by Piranha Press.

First, we must clarify that the series is fictional and characters from different centuries, as well as gods, are brought together in the same time and space.  Nonetheless, it constitutes a great introduction to philosophy for children (and adults) from a satirical, Epicurean perspective … except for the now-and-then rhetorical question being asked by a character: “anyone else smell sheepshit?”

Still, the sheepshit reference should be treated almost as a koan: raising children with critical thinking skills requires this kind of ability to openly question the givens in common conversation.

The creators of the series demonstrate a general familiarity with Epicurus’ perspectives and, although perhaps not intended as didactic material, the series does have some didactic value.  Through the use of mockery, it depicts the impracticality of Socratic reliance only on logic, the superstitious and fantastic worldview of Plato, the word-plays of the sophists, and how the gods behave in a manner that is all-too-human, even childish.

This last point is not articulated through the lips of the Epicurus character, but via the plot itself.  Through these dramatized critiques of other philosophies and beliefs, the Epicurean perspective on them and on the gods is eloquently articulated.

We also see Epicurus’ frequent, comical efforts to disassociate from Democritus, although he obviously had a debt of gratitude to his atomist teachings.

The series is available from amazon or ebay.

Epicurus the Sage, Vol. 2: The Many Loves of Zeus