I am writing this piece because the matter of cultural continuity is of extreme importance for the work of the Society of Epicurus and for its vision and goal, and it requires cultural institutions that are self-preserving and self-perpetuating such as the 20th, festivals, formal instruction, etc.

The holidays are the season where communities gather to be communities. To eat, to sing, to worship, to hear sermons, to cook, to gossip, to play. To pass on culture. Christians, Jews, and some Blacks have their specific formulas for doing this (Christmas, Hannukah, and Kwanzaa) and society at large has a consumerist attitude towards the season which is, frankly, one of the symptoms of our society’s pervasive sickness. In recent years, and perhaps serving as further exhibits for what’s being called the rise of the cultural creatives, non-religious people created HumanLight (humanlight.org) as a humanist alternative to the traditional festivities in other cultures.

Some of the critics of the new tradition are claiming that this is an appropriation of Christmas, but fail to acknowledge that Christmas originated as an appropriation of Mithrasmas, Saturnalia and other traditions, mostly Scandinavian in origin for those of us in North America. Culture has always been recycled in this manner.

I propose that, for Epicureans, the HumanLight tradition might be one way to celebrate the 20th of December (as it’s supposed to fall on or near the 23rd of December). This can be our way of celebrating the solstice.

Annual or cyclical festivities are of great importance in the process of developing collective narratives and instilling values, modes of living and thinking.

I should particularly cite the example of Kwanzaa, the African-American secular festivity which was created only in recent decades and has grown to national recognition. Kwanzaa effectively passes on a certain set of mores by its perpetuation of the seven principles: unity (umoja), self-determination (kujichagulia), collective work and responsibility (ujima), cooperative economics (ujamaa), purpose (nia), creativity (kuumba), and faith (imani). Each is represented by one of seven candles of a kinara, which is not too different from the Jewish menorah.  Year after year, participants in the festivities resolve to engage these seven principles and reignite narratives that build communities and nurture characters.

I have attended a couple of Kwanzaa celebrations over the years. There were several dramatic performances and African music and food was shared in one of them. The other one involved a colorful modern griot/storyteller accompanied by several drummers and dancers.

Kwanzaa is not just about art. Of particular interest is Kwanzaa’s critique of the consumerism of the season. Although during the festivities gifts are exchanged between members of the community, people are encouraged to make the gifts themselves as creative artifacts, or to buy from local artisans, rather than to engage in the consumerist frenzy. This has the effect of increasing the output of arts and crafts during the season and of increasing the community’s economic and cultural wealth.

Epicurean philosophy presents a critique of consumerism based on the imperative to have control over our desires and to have autarchy, and more time for living life, so that the Kwanzaa model of gifts exchange should perhaps serve HumanLight participants well.

Kwanzaa also has symbols and a ceremonial language all its own which reasserts itself every year, creating its own magic. Much can be learned of these symbols, as well as from the symbols of Christmas. The lighting of candles, like the star in the Christmas narrative and the star and lights of the traditional holiday tree, originally owe their existence to the fact that the solstice marks the darkest time of the year: the longest night, and shortest day in the northern hemisphere, and that therefore this is a time of reemergence, of renewal, a time when light increases again.

The protocol for HumanLight celebrations calls for candles in the three prime colors that represent Compassion, Reason and Hope (red, golden and blue).

We may adopt HumanLight as a way to enhance our sense of community. The choice of these three principles reminds me of how we root our values in the past, present and future, and suggests that Humanist narratives can easily be framed within the ceremonial context of the festivities.

The compassion candle reminds me of community, of humanitarianism and the collective identities that we are nurtured into: our context. The red candle can represent the friendship that binds us. It is here that we express our gratitude and appreciation to our true friends either verbally or with gifts exchange.

With compassion linking us to other humans, this principle can also be a reminder of anthropology, our roots and history. We draw our identity from our humanity and the narratives related to our origins and our first human ancestors. Humanism IS the spirituality and essence, the ‘ism’ of being human.

The candle of Reason represents the process and the inner revolution of applied philosophy. It also alludes to the myth of Prometheus stealing fire from the Gods and giving it to humans, which is the archetypal humanist theme. The domestication of fire is seen as a domestication of man also: fire represents science, knowledge, technology, art, creativity, the ability to cook food, and freedom from irrational fears. Without fire, our ancestors would not have been able to venture into cold weather environments and expand the human enterprise. Fire is also associated with electricity, the life-force of our inventions and machines, which gives us the ability to fully shape the world around us and frees us and other animals of the need for brute labor.

Reason represents man, his freedom and creativity, and the golden candle may be dedicated to the analyzed life.  It is here that we express our gratitude for philosophy.

The third candle, that of Hope, represents our sense of destiny, our ideals, narratives and fears about the future so often dramatized in our science fiction folklore. It represents our sense of self-creation and chosen destiny, and the expansive, sky-blue candle can be dedicated to autarchy.  It is here that we formally make resolutions for the coming year and engage in living the planned life so that our hope is truly rooted in prudence.

Notice in the language of the Humanlight ceremony the progression from past/groundedness to present to future and destiny; from the restriction of matter and context to the freedom of choice and resolution.

If you are involved in Humanist community-building, choose to think of this article as an early invitation and challenge for next year’s consumerism-free solstice festivities. Enjoy the rest of the holiday season! Happy Humanlights!

Bah, Hannukah!  Christopher Hitchens’ commentary on how Hannukah celebrates a particularly anti-Epicurean tale of obscurantist theocratic triumph during the solstice 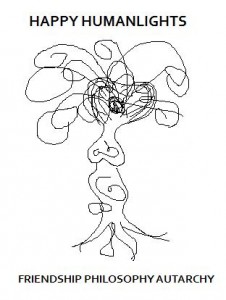