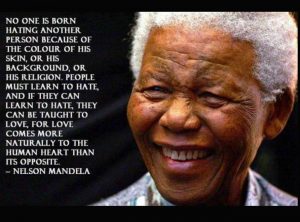 From time to time, I evaluate philosophical concepts from various cultures or intellectuals, and write about them from an Epicurean perspective in order to explore what a cosmopolitan Epicureanism would look like. I’ve written about African philosophical concepts before–see, for instance, this essay on the virtue of coolness. Today I’m exploring the idea of humanity and humaneness, and of how we become humanized through friendship and wholesome social relations.

Modern African cultures are notoriously colonized by Islamic and Christian ideas, frequently to their detriment: Boko Haram’s–a group whose name means “books are forbidden”–sexual enslavement of school girls in Nigeria, and the threats by Islamists to destroy medieval scrolls of incalculable value in Timbuktu, come to mind. Increasingly, less of the aboriginal wisdom traditions survive, and often only in syncretistic forms. It’s therefore refreshing to find a vibrant humanist philosophical discourse in the south of the continent around the concept of Ubuntu. It’s a Bantu term that translates as “humanity”, and is often related to the proverb “I am because we are”–which implies that people form their identities by socialization.

This reminds me of another saying that the Mayans have: “I am another you”–which implies that when we see the other, we are seeing a mirror of us. AND, if you’ll indulge my pop culture reference, Ubuntu also reminds me of Michael Jackson’s epic song Another Part of Me–where he argues that we (who want a better world) are legion.

Ubuntu is a secular humanistic tradition indigenous to Africa. According to Wikipedia:

Ubuntu asserts that society, not a transcendent being, gives human beings their humanity. An example is a Zulu-speaking person who when commanding to speak in Zulu would say “khuluma isintu,” which means “speak the language of people”.

This reminds us a bit of Epicurus’ insistence on clear and conventional speech, which avoids “flowery words” and empty flattery linked to inauthenticity. Ubuntu carries the implication of being real, of not being fake, of being authentic. In a later example, the essay says:

According to Michael Onyebuchi Eze, the core of ubuntu can best be summarised as follows: ” A person is a person through other people” strikes an affirmation of one’s humanity through recognition of an ‘other’ in his or her uniqueness and difference. It is a demand for a creative intersubjective formation in which the ‘other’ becomes a mirror (but only a mirror) for my subjectivity. This idealism suggests to us that humanity is not embedded in my person solely as an individual; my humanity is co-substantively bestowed upon the other and me. Humanity is a quality we owe to each other. We create each other and need to sustain this otherness creation. …

Notice–in spite of the “idealism” reference–how the concreteness of the personhood of each individual is acknowledged. Here, we see a different, more egalitarian, approach to inter-subjectivity than, say, Sartre’s existentialist exploration of it. Sartre concludes that all or most interpersonal relations turn the other into an object, and that the objectified other resents the power exerted by the observer. Here, instead, the idea of a mirror is introduced, which implies an understanding of human nature that is much less oppressive, much more receptive of the other. This seems to be demonstrated in studies of bodily mirroring and empathy among humans and primates, as I discussed in my book review of The Bonobo and the Atheist:

… the author argues that these mechanisms are physical and neurological. He discusses processes of bodily synchronization, contagion of happiness or sadness, and yawn contagion which are seen in nature among many primates, and what is known as mirror neurons that “fuse people at a bodily level”.

“… we activate neural representations of motor actions in our brain similar to the ones we perceive or expect in the other … Frowns induce sadness, smiles happiness. Ulf Dimberg, the Swedish psychologist who conducted this research, told me about the initial resistance, which made it hard to get his findings published in the 1990s … at the time, empathy was viewed as a complex skill under cerebral control. We decide to be empathic, so the thinking went, on the basis of deliberate simulations in our head of how we would feel in someone else’s situation. Empathy was seen as a cognitive skill. Now we know that the process is both simpler and more automatic. It’s not that we lack control (breathing is automatic too, but we are still in command), but science looked at empathy entirely the wrong way. Empathy stems from unconscious bodily connections involving faces, voices, and emotions. Humans don’t decide to be empathic; they just are.”

Epicureans believe in polyvalent logic: we observe that sometimes not just one, but many truths and many interpretations are evident. Perhaps a synthesis of Sartre’s subject-object model and these subject-subject models might provide us with a more complete understanding of empathy?

In the context of post-apartheid South African history, Ubuntu was appropriated by Christian theologians (like Desmond Tutu) to promote interracial forgiveness and reconciliation. But it was about much more than “Christian” forgiveness, and secularists must be careful to preserve the “secular spirit” of this African humanism because–even if we admit that Christianity helped to inspire the crucial reconciliation work in South Africa–we know that non-Christians also frequently see it advantageous to forgive, as we saw in the Lucretius’ passage. It is not usually in our nature to want to be in perpetual conflict with our neighbors.

For man grew weary: the life of violence
and hatred left him sick, and more disposed
freely to choose the yoke of law and statute.
For angered men kept calling for revenge
more savage than just law will now permit;
this made man sicken of life by violence …

Better be a subject and at peace – Lucretius

Ubuntu is part of the philosophical heritage of several countries in Southern Africa, including places like Botswana and Zimbabwe. Madonna has linked her work with orphans in Malawi to this tradition. Recently, Botswana abolished the illegality of gay sex. It came as a surprise to me when, in the aftermath of the abolition of apartheid, South Africa became the first and only country in Africa to approve gay marriage. This is a continent whose countries are known for having very repressive attitudes towards LGBT people, and where until recently Ugandan Christians were trying to pass the “Kill the Gays” bill. The homophobic cruelty that is pervasive in so much of Africa is one of the saddest aspects of the Islamic and Western colonial legacies.

And so Ubuntu in post-apartheid South Africa was about more than forgiveness: it was about the re-humanization of the other, who had been dehumanized. It’s also about letting the other be a subject, and not just an object. This included blacks and whites, and colored, and LGBT people. Ubuntu includes everyone, and in this it departs from African religious philosophies–which usually exclude and dehumanize LGBT people–and is all-encompassing and all-inclusive. It also inspires traditional respect for elders, hospitality, and other African values and concrete actions that are done to help ensure that people belong and feel fully human in the presence of others. Ubuntu demonstrates that a type of secular humanism has come to furnish moral guidance to societies in southern Africa and exhibits the power to transform how people treat each other.

Humaneness is not an exclusively African concept, although it takes on a particularly collectivist expression there because African societies are tribal. In my studies of Confucius, I learned about the concept of ren. Back then, I wrote:

which has multiple translations and is tied to the experience and the art of friendship. It can translate as humanity or authoritative conduct, virtue within society, manly or humane (as opposed to beastly), and carries the connotation of humane-ness. According to wikipedia, it’s “the good feeling a person experiences when being altruistic“, but according to Brooks & Brooks, the word carries different meanings according to context … The virtue of ren is so quintessential to civilized human life that it can properly be understood as the art of being human. In other words, we become truly human-like by association with other humans.

This insight stayed with me because it was fundamental to my understanding of Epicurus’ doctrines. Norman DeWitt, in Epicurus and His Philosophy

, says that philanthropy–here understood as love of humanity–was a feature of ancient Epicureanism, and that the Christians appropriated this and many other features of how the Epicureans organized themselves.

Epicurus’ philanthropy was not empty virtue-signaling. We see in Principal Doctrine 39 that loving and accepting everyone is not very realistic–as the early Epicureans learned from their experience with Timocrates–so that type of Platonic, unnatural philanthropy is not what is meant here. The founders of Epicureanism were adamant that we should stick to the clear meaning of words, and that we should cultivate certain habitual dispositions (diathesis) that were healthy and pleasant. Philanthropy is composed of philos (love, friendship) and anthropos (humans). If friendship is a natural good that makes life worth living, and is one of the most important ingredients of human happiness (as our doctrine teaches), this means that people should make great efforts to acquire many friends, and to become worth-befriending themselves. This is how philanthropy may serve as a tool to create a pleasant life.

All of us live in a pluralistic society, and there is much that we as Epicureans can learn about the intellectual traditions, history, and practices of African Humanism, and the more recent research that also empirically supports the values of Ubuntu.