With great pleasure I am sending you the Report on the recent Pan-Hellenic Symposium … We are daydreaming to organize an International Symposium of Epicurean Philosophy in Athens (and invite you first of all) sometime in the next 2-3 years, when/if the circumstances allow us.

For the fifth consecutive year since 2011, about 400 people from all over Greece, the largest ever sum of participants, gathered at the Cultural Center of Pallini in Athens in order to attend the two-day Pan-Hellenic Symposium of Epicurean Philosophy. The Symposium is organized, with free entrance, by the Friends of Epicurean Philosophy “Garden of Athens” and “Garden of Thessaloniki” under the auspices of the Municipality of Pallini. The Pan-Hellenic Symposium of Epicurean Philosophy takes place every year in February, because Epicurus was born in that month, and always in Pallini, because that particular municipality of modern Athens metropolitan area includes the ancient Athenian demos of Gargettus, from which Epicurus originated.

During the opening session of the first day on Saturday, February 7, 2015, the speech of the Mayor of Pallini Athanassios Zoutsos was applauded enthusiastically by all participants. The Mayor announced that the development of a green area of 5000 square meters, named “Garden of Epicurus”, was completed and will include initially a bronze relief sculpture offered by the renowned sculptor Aspasia Papadoperaki, a member of The Garden of Athens, and in the future a statue of the philosopher, and a wall with some of his Principal Doctrines. In addition, he said that a website with the Declaration of the Right of Happiness in the European Union will be launched within a month initiating a campaign of collecting signatures in order to bring the issue to the EU parliament. The Mayor also announced the funding of a book of Proceedings in English which will include the 40-50 best presentations of the first five Pan-Hellenic Symposia of Epicurean Philosophy, edited by members of the Garden of Athens.

Following the initial greetings of representatives from the Greek Gardens, the audience experienced the formation of a world-wide bridge of friendship, with the moving salute from the Consul Sienra on behalf of President of Uruguay José Mujica, and cordial greetings from Hiram Crespo (Society of Friends of Epicurus), Geoff Petersson (Garden of Sydney, Australia), and Cassius (newepicurean.com, USA).

Session 1 “PRINCIPLES OF EPICURUS’ PHILOSOPHY” started with some parts of the Letter to Menoeceus written in verses by poet Thanassis Yapijakis and beautifully recited by actor Giorgos Klonis. Then, the presentations “Life of Epicurus” and “The philosophy of Epicurus” covered a broad introduction for those attendants with limited knowledge of Epicurus and his philosophy. The topics of “Multi-valued logic” of Kostas Karderinis and “Manifold way” of Dimitris Altas discussed extensively the free and multileveled Epicurean way of thinking.
As an example of how the Epicurean philosophy may affect political thinking and realistic policies in the modern world, the video of the inspired speech of President of Uruguay José Mujica in Rio de Janeiro (Brazil) at the 2012 Earth Summit was presented and enthusiastically applauded by the Symposium attendants.

Session 2 “THE EXPERIENTIAL APPROACH TO EPICUREAN PHILOSOPHY” started with presentation “Free will according to Epicurus” of Christos Yapijakis who discussed the philosophical orientation of Epicurus’ thoughts on the matter, as well as in brief the current scientific knowledge regarding chance in nature and regarding human conscience. Two more presentations covered the topics “The Value of Epicurean Reciprocity in our Modern Era” by Dimitris Dimitriadis and “The Epicurean Philosophy as the Peak of Hellenism” by Dimitris Iarmakopoulos, followed by “Presentation of Publications and Websites of Greek Gardens” by Takis Panagiotopoulos, who discussed the over one thousand pages worth of greek books published by the Friends of Epicurean Philosophy in the last four years, as well as the wealth of information in greek websites epicuros.gr and epicuros.net.

The Session was followed by scenes from a new movie “Orpheus: How Not to Speak” by the reknown director Theodoros Marangos, which features the misery and lack of philosophical knowledge of average modern Greeks. Finally, a live discussion on “The experiential today and tomorrow of Epicurean philosophy” kept the audience until 10 pm, when it was interrupted so that the Friends of Epicurean Philosophy could participate in an actual symposium with dining, drinking, and dancing in a nearby taverna named “Aristoteles”.

On Sunday, February 8, 2015, the Mayor of Pallini Athanassios Zoutsos and the Friends of Epicurean Philosophy visited the area “Garden of Epicurus” and discussed plans for its future development.

Session 3 “EPICUREANS IN ANTIQUITY” started with “The Epicurean Naturalistic Approach to the Gods” by Giorgos Bakogiannis that presented the atomic reality of gods according to Epicurus, Velleius, Philodemus, and Lucretius. The following presentations focused mainly on the Epicurean philosopher who became famous from the Herculaneum papyri: “Philodemus, the Epicurean Philosopher” by Pavlos Kopakas, “Philodemus’ On Signs” by Panagiotis Papavassiliou and “On Wealth” by Giorgos Kaplanis.

The session was followed by an artistic interval in which the famous actor Gerassimos Gennatas most vividly read the Letter to Menoeceus and Litsa Pitsikali (a member of The Garden of Athens) played some selected piano pieces.

The final session 4 “THE ETERNAL VALUE OF THE EPICUREAN PHILOSOPHY” included presentations such as “Epicurean Philosophy and Philanthropy”, an inspired speech by professor of Applied Ethics Evangelos Protopapadakis; “Empiricism as a Continuation of Epicurean philosophy” by Litsa Pitsikali; “Time and Epicurean Worldview” a comprehensive presentation by Babis Patzoglou; “The Eternal Importance of Epicurean Philosophy” by Aspasia Papadoperaki; and finally “Epicurean Socialization: Family and Social Justice” by Themis Michos.
The following discussion “What We Learned in this Symposium” stirred the audience about several issues. Mostly the issue of the belief in Gods was lively discussed with everyone agreeing that Epicurus and most ancient Epicureans believed in the existence of Gods, and that all modern Epicureans tend to agree in lack of divine providence and in religious freedom of people, just like the Epicurean Thomas Jefferson first established in USA.

From the ten poster presentations, that were viewed during the intervals of the Symposium, the audience seemed to discuss more the following:

– “The Cups with the Skeletons: A hymn to life and a suggestion for enjoying the present” by Takis Panagiotopoulos

The Symposium was a great success and was held in a friendly and delighful atmosphere. The only problem was that a friend from the Garden of Thessaloniki who usually video records the Symposia was gone unexpectedely ill so he did not attend, therefore only voice recording of the presentations and still pictures were taken.

Delighted with the amazing weekend, the Friends of Epicurean Philosophy in Greece renewed their appointment for the 6th Panhellenic Symposium, next year in February 2016. 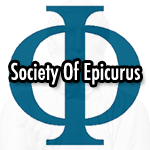